April 30 was the 32 annual Fabulous Fords Forever Show in Buena Park.  Nearly 2000 cars were there from beautiful restorations to survivors to customs.  It ran the gamut and there was surely something for everyone.

One real standout was a wonderfully restored 1964 Country Squire that I picked as this blogs Best of Show.  IT was kept original, lovingly taken care of by a man who's mother owned the car when he was a kid.  The glass is all original and it even had the stickers from places they visited with the car on cross country road trips. 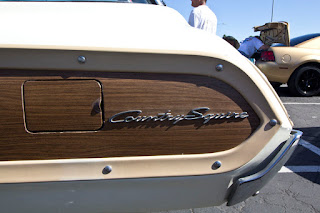 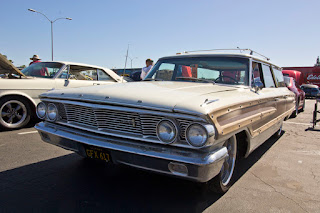 Another beautiful car was the Best of Show survivor...a time capsule of opulence from a time gone by, unmolested and showing its patina of age.  A 1972 Lincoln Mark IV 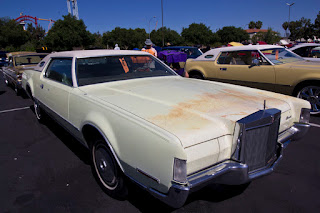 New this year was a boat load of hot hatches represented by the Fiesta ST, Focus ST and Focus RS.  One in particular jumped out as best Modern Custom of the Show was a 2016 Focus RS given a screaming yellow paint job with full scissor doors and really wicked multi-color LED surround around the headlamps. 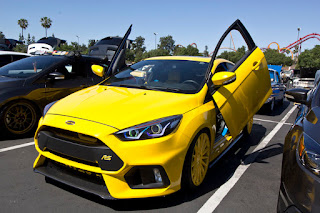 All pics are by me, there is more in a Flickr Album.
Posted by frazgo at 4:38 PM No comments:

Set your clocks to get up and on the road early to Buena Park, across from Knott's Berry Farm for the 32nd Annual Fabulous Fords Forever.   This show happens to be the largest single manufacturer show on the west coast.  With close to 2000...TWO THOUSAND Ford, Lincoln, Mercury, Edsel and the odd foreign Ford product tossed in for good measure.  I haven't missed a one in years.

Details....Sunday April 30 2017 from 10AM to 3PM.  This show is well attended and the brand is well represented.  More information on their web site HERE.  MAP HERE.

As always there will be celebrities and show cars including a tease of the 2018 Mustang due out this fall.

Old Town Pasadena had more than the usual hustle and bustle this Sunday.  It had the roar and scream of 150 Ferrari's arriving for the 10th Annual Concorso Ferrari.

It was really a pretty incredible show.  I was amazed at the collection of vintage and collectible Ferrari at this years show.  This year there were more than half dozen F40's and TWO La Ferrari...care to venture the value of those cars alone?

More pics from the 2017 Concorso Ferrari are in a flickr album.
Posted by frazgo at 9:38 AM No comments:

I've been admiring the Edge from afar.  From this generations preview October 2014 at the Ford Regional HQ in Irvine to a first drive of an ecoboost SEL at an Ecoboost Event to a Sport last summer its always peaked my interest as a viable option over a midsize sedan.

My wife was an important decider in the Edge over our other options for a new family car.  She liked the height and view of the road as well as the ease of handling and quiet ride.  (The other two options were ruled out as they were cars and she didn't want another midsize sedan in the house so there went the Fusion Titanium and the Accord V6 Touring).

In the world of midsize cross overs there is a few nice choices.  My experience with the Toyota Highlander is that its boomy and soft on handling, The Honda Pilot is too SUV like and I really don't need a 3rd row, I'd rather have cargo space.  What sold me on the Edge is its build quality inside and out then the silence on the road and solidity of the platform. The clincher was the user friendly Sync 3 with Apple Carplay.  All things its two biggest competitors didn't quite match in my not so humble.

I settled on the SEL as it had the best combination of options and value for what I was looking for.  I opted for the 3.5l Ti-VCT V6 as I make frequent Vegas runs and felt that under full load of passengers and luggage this engine would loaf up the Baker Grade and not cause me problems.  I've got prior experience with this power train and know its pretty bullet proof and will be durable over the long haul. 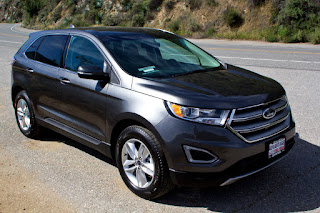 I special ordered this particular model to include the 201A Equipment group, The technology package and Utility package.

The 201A Equipement group upgrades the interior of the Edge SEL significantly with these added options.

All told I showed restraint to get this equipped nicely without breaking the bank.  The two remaining big ticket items I skipped were the Alloy wheels and Panoramic Sunroof.  I like the standard silver frost painted wheels and as often as I'm in the desert the sunroof just doesn't make sense for me.

I've made my inaugural run up San Gabriel Canyon.  The ride was good, the handling better than expected when you got to the twisties.  Certainly not confidence inspiring like a hot hatch, just a good stable turn in and exit with no body roll drama.  Power up the hill was more than adequate.  Downhill the standard paddle shifters to control engine braking was a marvel all onto its own.  Blip up or down as needed and the tranny responded with polite crisp shifts to the desired gear.

I have to give a shout out to Jorge Sanchez at Advantage Ford in Duarte who made the whole shopping and ordering process easy and painless.  Added boner with Advantage Ford is your first service is gratis.  Nice little perk to ensure you service with them and get acquainted with their service department.

Stay tuned for the one year anniversary recap.

Posted by frazgo at 9:32 AM No comments:

Mark your calendars, get up early Sunday 4/23 and head on over to the Concorso Ferrari in Old Town Pasadena.  This tightly curated show of vintage to nearly new, rare and important Ferrari's consists of 150 cars located on Colorado Boulevard between Pasadena Avenue and Raymond Avenues.

The cars start to arrive about 7:30AM and are all in place and ready for their kodak moment when the show opens at 10:00AM.  Don't dawdle about at the show is over at 3PM and there is plenty to see.

MAP HERE
Posted by frazgo at 12:17 PM No comments:

Buick updates the Regal with TourX and Sportback variations 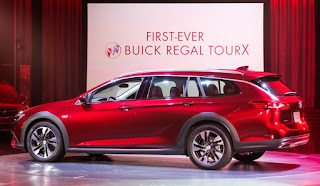 The Regal TourX, featuring intelligent all-wheel drive, is a crossover with the drive dynamics of a car and the versatility of an SUV. Pricing will be announced closer to the sale date in the fourth quarter of 2017. (Photo by Steve Fecht for Buick) 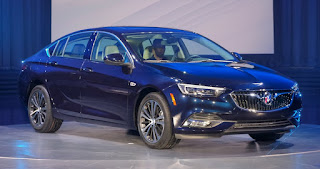 Sportback provides a balance of form and function with a coupe-like design and five-door layout enabling easier access to cargo space. Pricing will be announced closer to the sale date in the fourth quarter of 2017. (Photo by Steve Fecht for Buick)

Dusting off the old password....and bring a bit of freshness to the old blog. (Sorry for the lapse, I had knee surgery that laid me up and kept from getting out or even sitting at a 'puter).  The Regal by Buick so far has been lackluster sales for the brand and these two updates may help set the model on fire.  The mid-size near luxury car has the potential to suddenly pop up on American buyers radar with these two submodels added to the mix.

In particular something missing from the market in general here, but is a big deal in the luxury market in the EU is station wagon variants of mainstream models.  Not hard to understand our penchant for supersized SUV, but there really is a need for fuel efficient cars that happen to haul stuff too.  I think the TourX will do more for Regal and spur sales further than the nice packaged four sedan has done on its own.  (2016 sales were a meager 19,866 units).

I'm not so sure that the hatchback aka Sportback will garner the buyers attention as much as the TourX.  Its nice enough looking so I hope to be wrong on this version of the Regal.

The last Regal I drove was a GS variant with the 2 liter turbo that pumps out 259 hoursepower and a stunning 295 ft lbs of torgue and funnels it all through an All Wheel Drive set up.  It was quick, ride was firm, steering was stiff with ample feed back.  Interestingly it stickered at close to 42K and was deeply discounted to 35K in an effort to move it off the lot.  Thats been a problem for Buick...Nice enough looking car but just a slow seller.
Posted by frazgo at 4:05 PM No comments: 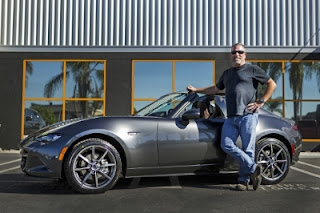 IRVINE, Calif., Nov. 22, 2016 /PRNewswire/ -- There's plenty to be thankful for this week, but Mazda North American Operations (MNAO) has added to that list by announcing that the 2017 Mazda MX-5 Miata RF has officially gone on sale in the U.S. The MX-5 RF arrives two months ahead of its originally announced timing due to shifts in the production schedule.

Dave Putter, the first customer to take delivery in the U.S., met with MNAO President and CEO Masahiro Moro onstage at the Los Angeles Auto Show last week to receive his keys ahead of taking home his MX-5 RF Launch Edition the following day. Putter was among the first customers to order one of the 1,000 MX-5 RF Launch Edition vehicles in October and is now the proud owner of his 16th Mazda and his eighth MX-5 Miata.

"Mazda is a unique and special car company that aims to do more than simply sell cars," said Moro. "We want to build lifelong relationships with our customers and fans, providing them a fulfilling ownership experience they couldn't get anywhere else."
Putter's MX-5 RF was air-freighted to Huntington Beach Mazda, where he took delivery. Approximately 500 additional MX-5 RFs will arrive nationwide beginning in early December, followed by wider-scale availability throughout the winter and spring.

The first-ever MX-5 RF gets its name from its exotic KODO design—"Retractable Fastback"—in which its power-operated top can deploy from closed to open or vice versa in a mere 13 seconds. Complementing the World Car of the Year-winning MX-5 roadster, MX-5 RF satisfies the open-air experience of the soft top model but with a vastly different, coupe-like design and premium accoutrements. It comes powered by a free-revving, 2.0-liter SKYACTIV-G engine, paired with either a SKYACTIV-MT six-speed manual or six-speed automatic transmission, sending power to the rear wheels
.
Available exclusively in MX-5 RF Club and Grand Touring trim levels and starting from an MSRP of $31,5551, the hardtop MX-5 adds a 4.6-inch TFT color gauge display in addition to its folding roof. It is also the only MX-5 variant available with the liquid-metal-like Machine Gray Metallic paint.

MX-5 RF Launch Edition is based on the Grand Touring model and comes finished exclusively in Machine Gray. It is the only U.S.-bound MX-5 model to have Auburn Nappa leather and a hand-painted black top for the 2017 model year.

Mazda North American Operations is headquartered in Irvine, Calif., and oversees the sales, marketing, parts and customer service support of Mazda vehicles in the United States and Mexico through nearly 700 dealers.  Operations in Mexico are managed by Mazda Motor de Mexico in Mexico City.  For more information on Mazda vehicles, including photography and B-roll, please visit the online Mazda media center at www.mazdausamedia.com.
1MSRP does not include $835 for destination and handling ($880 in Alaska) or any additional taxes or fees. Dealers set actual sale prices.
Posted by frazgo at 4:10 PM No comments: