Its no secret at this point...this is the #NissanYearoftheTruck.  With all Armada, Titan XD and Pathinfinder on sale or about to go on sale, the regular duty TITAN is ready to join the ranks.  Its part of Nissan's lofty goal of selling 500,000 trucks a year by the end of this year.

Fleshing out their line of trucks is the light duty TITAN that was revealed at the New York Auto Show in the spring.  This truck available in regular or crew cabs will be the volume leader of their truck business.  Its all new and focused on several areas to take on the competition in a variety of trims from S,SV, SL, Pro-4X to Platinum Reserve its designed to be the go to for fleet managers who already have their NV vans in service.  Some of the key things they did for the TITAN:


In development of their regular duty truck Nissan looked at 4 key areas of development to set themselves apart from their competition and set themselves up to be a leader in the truck field. the areas of focus:
They took a bold styling approach to emphasize power and abilities when looked at even at a stand still.  Power bulge in the hood indicates its packing.  Add in nice touches like LED headlamps and taillamps.  Their signature deep V chrome grill unique to TITAN but bears a family resemblance that is enhanced with their boomerang LED Daytime Running Lamps.  It even has LED Puddle lamps and improved running boards for easier access to the cab and bed over the 2014 models.

Aerodynamics were improved over the 2014 model by 10%.  Things like active grill shutters when the engine and condensor don't need large air flow close down to improve air flow.  Bed seals, smoother front air dam and undercarriage sealing all improve aeros on the road.

Coupling the newly improved drivetrain with these aerodynamics you get improved fuel economy.  How much?  A whopping 28% increase in fuel economy over 2014 to 15 MPG city, 21 highway and 17 combined.  Not bad when you look at the TITAN half ton's base towing capacity is a class leading 9,390 pounds!

A lot of attention was put into making the new TITAN a class leading quiet and comfortable cabin. Things like hydraulic body mounts, acoustic front side glass and better sealing of the cabin result in a 43% reduction of noise inside at cruise speeds.  An enhanced frame new for 2017 allows for better handling while further reducing noise and vibration passed into the cab.  End results is ride and handling are improved and Nissan is proud of these achievements:


The truck bed has a lot of new and useful features.  Its obvious a lot of thought went into how people use trucks and built in some pretty slick ideas.  The cargo bed has LEDs embedded into the light rail for even load illumination.  There are built in cargo rails that are designed so you can use a tonneau cover or bed topper.  They even put lockable dry storage compartments into the side of the box!

For 2017 Nissan adds some really new and useful drivers aids to enhance driving and trailering. Among them;
The big news with all the changes to the TITAN is that its will get a best in class warranty to back up how serious Nissan is about the truck market.  The new warranty will be 5 years/100,000 miles.

Now that I've told you about how the truck has changed, what does it all mean in the real world?  Driving impression is that this is still a truck, refined and quieter than most.  Definitely a smoother ride than most of its competition with noticeably less wiggle and jiggle over potholes and speed bumps (or humps as the refined neighborhoods call them).

Steering is precise and it has decent road feel, again better than most of its competition.  What I really appreciated was the back up camera and 360 Around View when driving and parking into tight spaces.  Its a lot more confidence inspiring knowing whats next to the fenders!

The model I drove and photographed was the new tippy top of the line Platinum Reserve. This trim level brings about such niceties as single stitched leather seating, soft touch dash, heated and cooled seats, multiple USB ports, electrical ports and an uber quiet luxury car ride.  Add in the standard driving changes and this could easily be mistaken for the cabin of a luxury car, not a truck capable of towing nearly 5 tons of stuff or offroading.  You won't mistake it for their 370z in roadhandling, but you will know its much more comfortable and easy to drive in over the long haul than most of its competition. 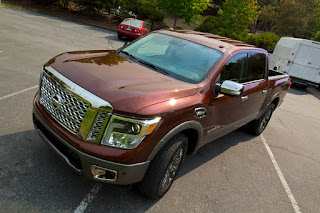 Just as a little reminder, this trip Nissan paid for my travel and put me up in the swanky Carmel Valley Ranch Lodge.  Their providing this junket didn't affect my opinion...as if anyone can sway influence over me.